What Ever Happened to Godly Mathew? Part III 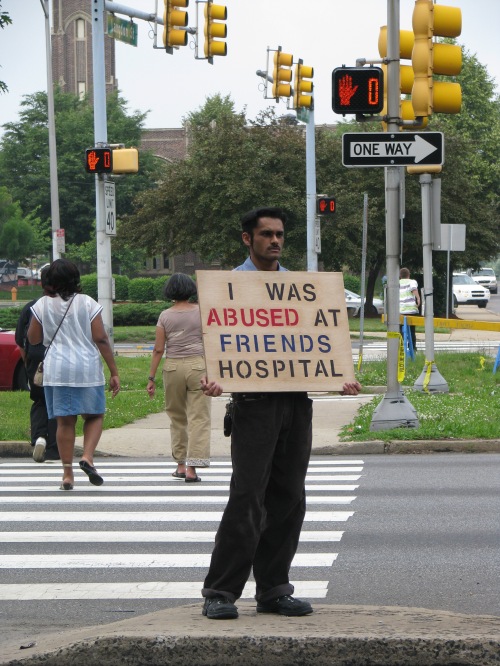 Part three of my interview with Godly Mathew [You can find Part I and Part II here.] Was this soft-spoken, self-described eccentric abused by Friends Hospital four years ago? Why does he stand at the Boulevard day after day, enduring the stares and scrutiny of passers-by?

Q: What are people’s reactions to your protest?
A: Most of the response is very positive. People give me a thumbs up or honk. I am very grateful for their show of support. It is one of the things that keeps me motivated and hopeful. Occasionally, someone laughs derisively or makes a vulgar remark but those are not as frequent as the positive ones.

Q: Have you ever contacted a lawyer or filed a suit?
A: Two years after the incident, I filed a civil case on my own in the federal court system. Apparently malpractice lawyers don’t want to go anywhere near a psych abuse case unless there is a gross degree of malpractice. I was also not interested in playing the role of the victim beyond what I suffered. So I filed the case pro se, but it was thrown out after Friends Hospital hired an attorney who made a motion to dismiss. I could not afford to pay a forensic psychiatrist for a Certificate of Merit which would have been required for me to re-file the case in the state court system. Two years is the statute of limitation, so that was pretty much the end of that path.

Q: It’s been four years and some odd months since this happened. Why protest now?
A: The first time I was involuntarily committed to Friends Hospital, I was too embarrassed to tell anyone. And the second time, the reason it took me four years, even though my goal was always to speak out, was it just took me time. After I got home it took me a long time to recover from the trauma and get back on my feet. Eventually I got a used car which gave me mobility, and not just in the physical sense. Plus I got my first long term job and later my first computer. So many things had to fall in place before I felt comfortable enough to do this. There was also the whole image thing which was an other obstacle. There’s a sort of awkwardness in publicizing that you were abused. By saying you’re a victim, you’re putting yourself in a very vulnerable position. Then there’s the added stigma of saying I was once in a mental hospital. It’s a cold fact to put out there.

Q: Why are you doing this? What do you hope to achieve?
A: I feel grateful because I can now be a voice for other people in this situation – an advocate for the rights of people stuck in the mental health system against their will. Medicating people, especially when it is done against their will, just keeps them locked in a cycle of patient hood and dependence on the mental health system instead of offering them a chance at true recovery. These hundred days are a transition period for me from victim to activist. Down the line I also hope to start a peer to peer support group for people who want to fight their ‘mental illness’ diagnosis. Additionally, the protest is a big component of my own recovery.

Q: How long were you affected by your experience at Friends?
A: My life will never be the same. At the same time, I’m taking steps to regain my confidence and optimism. My first big step was the case I filed against Friends Hospital. Even though it got dismissed, it taught me the value of standing up for my rights. I suffered a lot after my experience at Friends Hospital. I used to get a lot of nightmares and hot flashes. I would wake up at night with my body drenched in sweat and I would have to change my shirt because it was so wet and I would be shivering. Sometimes even now when I wake from my sleep, I notice my heart pounding. I realized though that the best way to recover was to consider myself a survivor and not a victim so I did not dwell too much on those points.

Q: Did you reach out to the medical profession?
A: I’m sure that I had symptoms of  PTSD , but I didn’t want to go back to the same mental health system that did this to me in the first place. Besides I did not want to take any meds or be labeled with a mental illness diagnosis. On a side note, soon after the incident a family member took me to an Indian primary physician who was a friend of hers. This was a couple of days after the Friends incident and I had a throat infection, probably from the tube that was put in my throat in the ambulance. He gave me two sample bottles of a medicine called Zyprexa and said that they were for the infection. Luckily I called Rite-Aid and found out that they were an anti psychotic commonly prescribed to treat schizophrenia. It was shocking that a doctor would lie to you straight to your face but I guess there is a double standard when it comes to psychiatric patients. I’m glad I never took them.

Q: What were some of the steps you took towards recovery?
A: I was very fortunate that I got out of the mental health system and secondly that I had a few dedicated supporters who kept encouraging me to recover. My first breakthrough was getting a job at a gas station. It was my first real long term job. I got it at the age of 22, I think. I never really had good social skills before, but through the job I got to interact with customers and I gained valuable social skills. I began to realize that true mental health was not psychiatry but common sense self help and having a good support system. That’s why I’m a big advocate for alternatives to mainstream treatments for mental health issues. I know if I were sent back to Friends, I would’ve turned out a lot differently. I might have never recovered. I could have spent my entire life trapped in the revolving door of the mental health system.

Q: What are your future plans? Do you still want to return to India?
A: When I was younger, at one point I thought my calling was to go back to India and live a simple rural life with the poor people. That was where my passion was, but it’s not where life’s circumstances led me. I don’t have a choice. I have to follow this new path and see what I can do as far as activism and advocacy. Eventually, I might return to India and follow my dreams, but for now my obligations lay here. I plan on continuing as an activist beyond the 100 day protest and focusing on psychiatric abuse in general. I am hoping that a robust survivor movement can be started in the Philadelphia area and that more victims will come forward to collaborate.

Q: What do you want to tell other victims of psychiatric abuse?
A: I’m hoping to be an example to other psychiatric victims. There are many examples I look up to. There are so many people in the psychiatric survivor movement, especially members of mindfreedom, who are a constant inspiration. I’m not the first one to speak out. There were others who went before me and I’m glad they paved the way for me to travel down this path. I’m doing this for the larger community out there. I’m doing this for the patients who were there with me that night at Friends and for the patients that are there now and for psychiatric patients everywhere.

Q: How did your family react to your protest? Did they ever apologize?
A: My family’s reaction to my protest is pretty mixed and lukewarm. They are not against it but neither are they as encouraging as I would like. Not one of the individuals that were responsible apologized in a meaningful way. I have reconciled with most of them – though not everyone. I have forgiven everyone but I am not going to let certain individuals back into my life after what they did. But that’s not why I’m doing this. I would hate to see this kind of thing spread to other families who think they can manipulate their kids because they’re not doing what they want. This second time, unlike the first, I made a deliberate attempt at telling everyone I knew about what happened. I told my whole church and I called everyone I knew in the Malayalee community. I made a  deliberate point of not being shy about speaking out.

Q: I know Friends Hospital has contacted you via email. In an ideal situation, what would they say to you?
A: I really don’t see how there can ever be an ideal situation in a place like that. Psychiatric facilities routinely violate patients’ civil rights and autonomy under the pretext of helping them. To make some one into a life long mental patient against their will is not help but exploitation. But I do want to see them change their operating procedures significantly. If I see results, if I see that they’re reevaluating the way they deal with patients and they’re actually giving people the choice to decide whether or not they want to take medication, that would be a good start. I also want them to look into my allegations and conduct a rigorous and transparent investigation. I am not at all interested in monetary compensation but I would like a public apology for what happened as well as transparency in their operating procedures so this does not happen again. I don’t want any other patient to suffer the way I did.

14 responses to “What Ever Happened to Godly Mathew? Part III”